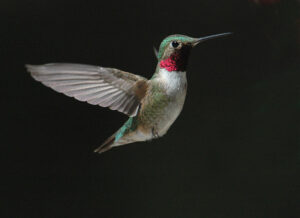 This is a puzzling year to me as I have visited several places up in the mountains where the number of birds and bird species seems really low, and, frankly, a bit depressing.  In contrast, Beaver Ranch continues to deliver!  On June 5th I led a walk here where we recorded 37 species, and then this past Saturday, July 10th, I led this walk here and we had 35 species.  It’s a head scratcher, even more so because Beaver Ranch can be such a zoo on a Saturday morning with all of the zip-line and frisbee golf activities going on.  Even while standing in the parking lot waiting for everyone to arrive, we recorded Broad-tailed Hummingbird, Turkey Vulture, Red-tailed Hawk, Say’s Phoebe, American Crow, Common Raven, Violet-green Swallow, Barn Swallow, American Robin, House Finch, and Red-winged Blackbird.  Not a bad parking lot list! 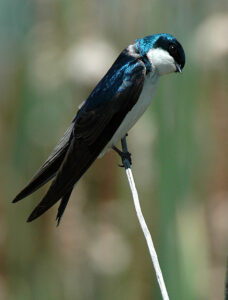 We then moved over to Casto Creek, which has extensive willows along it and runs through a long, open meadow.  Here we caught a brief glimpse of a Wilson’s Warbler, saw and heard a couple of Lincoln’s Sparrows and Song Sparrows, and then heard, but didn’t see, a MacGillivray’s Warbler.  These are all birds that we expect to see in montane willows, so, once again, knowing the habitat you are in can help you predict what birds might be there.  Also, in this vicinity we were treated to some wonderful singing by a Black-headed Grosbeak, and we had a Red-naped Sapsucker fly over the willows and land in a nearby ponderosa.  One neat observation we had was of a Tree Swallow feeding young at a nest box.  This was exactly what we had observed five weeks earlier on the prior walk, so evidently the same adults may now be working on having a second brood.  Finally, we got to watch the local adult Red-tailed Hawk being regularly harassed by Red-winged Blackbirds and American Crows.  Presumably it might have been doing its own harassing of them at another time. 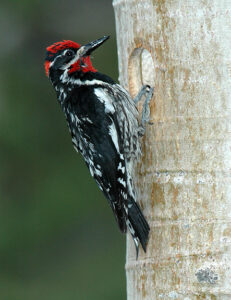 Leaving Casto Creek we made our way past the frisbee golf course and followed a small stream with lots of spruce and occasional openings with aspen.  At Celebration Meadow, where occasional weddings are held, we hit a hot spot of avian activity, due in large part to the several large “condo” aspen buried amidst the huge spruce trees.  Here, in one spot, we had Broad-tailed Hummingbird, Downy Woodpecker, Western Wood-Pewee, Cordilleran Flycatcher, Warbling Vireo, Steller’s Jay, Mountain Chickadee, Ruby-crowned Kinglet, White-breasted Nuthatch, House Wren, American Robin, Gray-headed Junco, Green-tailed Towhee, and Western Tanager.  The real prize, though, was the family of recently fledged, very active, loud Red-naped Sapsuckers.  Needless to say, we spent more than a few minutes craning our faces upward to try and take in as much of the drama as possible.

Beaver Ranch comes highly recommended.  Hope you can make it up there.
Chuck