It turned out to be another beautiful Colorado morning.  The temperature was indeed wonderful and we spotted a total of 23 species.We saw several common visitors in and around the area. Most of our group really considered themselves asbeginners, but they all turned out to be good spotters.

We made our way to the South Platte river and saw many of our winter visitors. They were beautiful! We got a real kick out of the Canada Geese. We laughed as this behemoth bird made a cracking, crunching sound as they walked on the ice. This bird is an incredible flyer and a great survivor as well!  The Canada Goose (not Canadian) was once esteemed as “ the noblest of our waterfowl,” and bred mostly in Canada and in Alaska. It used to migrate until man interfered with this pattern – they are now found almost everywhere and are often considered a messy nuisance.  However, the Canada Goose  didn’t expand its range on its own; it had human help. Beginning in the 1950’s it was introduced throughout the country to ensure there would be plenty to hunt- so there you have (some of) it!

The challenge is almost often ducks, such as the American Wigeon. We saw a perfect adult male in breeding plumage, with its green patch leading back from the eye, white forehead, brownish breast and flanks, white belly, black undertail and uppertail coverts, and a green speculum bordered with black.

What is a covert feather? A covert feather on a bird is a set of feathers, which as the name implies, covers other feathers. They help to smooth airflow overthe wings and tail. It’s one of the many things to help ID a bird. And a speculum? The speculum is a patch, often distinctly colored, on the secondary wing feathers of some birds. 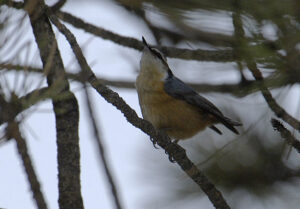 We spent some time too looking at Buffleheads, Ringed-necked duck, Gadwalls, and the Common Goldeneye. We ended our lovely walk with the sounds and sights of Black-capped Chickadees, House Finches and two adorable Red – breasted Nuthatches, which was a favorite as well! We’re looking forward to spring as we’ll welcome our spring migrates, but it’s nice to enjoy our year-round birds as well, for there is no such thing as a common bird!