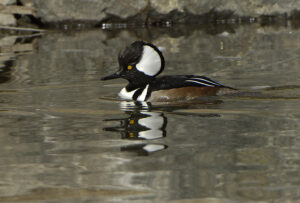 These mild fall days make it a joy to be out strolling around looking for birds.  I know we need some moisture, but on Saturday I was happy to be out in the sunshine.  The arrival of those duck species that overwinter here has started to increase, and we lucked into eleven species, including Northern Pintail, Ring-necked Duck, and the ever-showy Hooded Mergansers.  We also saw two species of grebes, a bunch of American Coots, and a few Double-crested Cormorants.  Our songbird numbers, in contrast were low, and we had no sparrows at all. 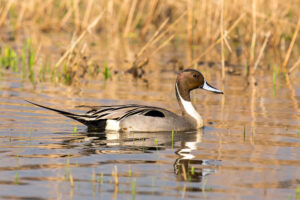 One of the challenges with identifying ducks is, if they’re dabblers, all you may get to see is their butts up in the air, and if they’re divers you may only see them briefly between dives.  On Saturday we had six dabblers, and even without seeing their heads we worked on how to identify them.  So, let’s talk a bit about butts.  Get your field guides out.  Male Northern Shovelers have a black butt, then a white hip patch with a bright rufous belly and flanks.  Both male and female Shovelers have white edging to their tail, but so do Mallards, so that can be a little tricky.  Gadwall males have an extensive black butt, and both male and female have a white wing patch in their secondary flight feathers, also known as a speculum.  Even when they’re tilted downwards this white speculum is often visible.  Male American Wigeon have a similar pattern to the Shovelers – black butt, white hip patch and belly in front of that, and then warm, orange-toned flanks.  The female has a speckly butt with the same white belly and orange-toned flanks as the male.  Mallard males have a black butt divided by a white tail with one curly black tail feather, then there’s a pale belly.  Females have the same whitish tail – not quite as bright as the male’s.  Northern Pintail males have a black butt with elongated tail feathers; then, in front of the black is a yellow-buff hip patch.  Females have a bit of an elongated tail, but otherwise they can be tricky.  Finally, Green-winged Teal have bit of a black butt, however, the undertail coverts are pale yellow and can be the dominant feature. 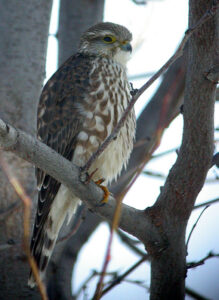 As for the highlight of the day, we had a Prairie Merlin stay perched in a nearby tree for over twenty minutes.  We got to look at it from all different perspectives and most folks got to take about a gazillion pictures of it.  This was a great bird, and we had world-class views!  Merlins breed throughout the northern hemisphere.  There are six subspecies found in Europe and Asia, and we have three subspecies in North America.  These vary from the very dark Pacific (Black) Merlin that occurs very rarely in Colorado, to the intermediate-colored Taiga Merlin, which is somewhat rare here, to the distinctly paler Prairie Merlin which is still fairly uncommon, but can be seen with some luck every year.  The male is smaller and has a pale bluish-gray back and crown while the female has a pale brown back and crown.  They both have a thin white supercilium (eyebrow) and only the slightest hint of the typical falcon “whisker” or “mustache.”  This last may not be visible at all.  In distinguishing a Merlin from an American Kestrel note the lack of any rufous coloring and note the multi-banded gray and black tail (white and black when seen from below).  This was definitely the bird of the day!