Hudson Gardens Field Trip – Jan 30, 2021 , 8:00am start time
Led by Patti Galli
Our Saturday morning at Hudson Gardens was sunny and beautiful. As sometimes typical for January birding in Colorado, it was also a quiet start. The birds must still have been sleeping!  That was ok though, we enjoyed slowly walking the grounds exploring and making our way to the South Platte River to see who may be in the water. We found the river loaded with Canada geese, Mallards (beautiful healthy looking males), Gadwalls, and gorgeous Buffleheads.

In addition, a muskrat was spotted.  We crossed to the other side of the river and were greeted by  dozens of Black-capped Chickadees and the happy sounds of American Robins. It was still way too early for Spring, but our feather friends seemed to be getting ready.
The fun find of the day was a large flock of Bushtits. The Bushtit was formerly classified in the family Paridae along with chickadees and titmice, which it resembles in behavior. Later, Bushtits were reclassified into their own species. The name of its genus- Psaltriparus – is a combination of the Greek word psaltria, an ancient stringed instrument played with a bow or a plectrum; and the Latin word parus (a titmouse).  They were so named for the birds’ high-pitched calls that resembles the notes of a psaltery.  So next time you hear the name, I bet you don’t giggle as much!! 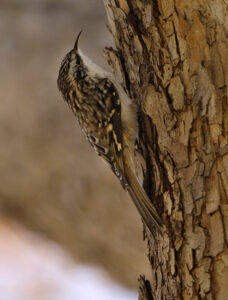 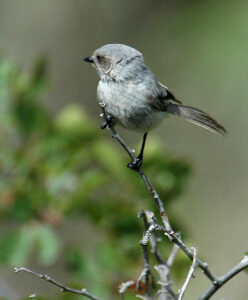