Saturday was another great day of birding! Eleven of us went to South Platte Park, where the winds calmed down and the temperature warmed up quite nicely.  We began by noting the orange legs on the female Common Mergansers.

Our first really enthralling bird of the day was a female Northern Harrier, which flew down from a nearby tree with prey in its talons, and landed out in the open on the edge of Blackrock Lake. We were able to watch her for some time as she ate her breakfast – possibly a pigeon or a coot. The photos below are not of our bird, but they give you an idea of what we saw. Note the owl-like facial disc, the white both above and below the eye, the streaking on the upper breast and nape, the long banded tail, the white rump, AND the prey (in this case a Green-winged Teal).

Then, we were most fortunate to see my target bird for the day, Greater Scaup, which are an uncommon wintering bird in the interior of the continent, preferring salt water along both coasts. However, they have been occurring regularly at Blackrock Lake over the past three winters, and we were able to see eight of them. Distinguishing Greater Scaup from Lesser Scaup, which occur regularly here in the winter, is one of the trickier IDs, and I hope our group didn’t tire of my trying to point out some of the distinguishing characteristics. Among these, head-shape is a key factor. In the photos below note how the three Greater Scaup have more rounded, longer heads, with eyes closer to the top of their heads. The single Lesser Scaup, on the other hand, has a more pointy head with an obvious corner towards the rear of the head, and the eye appears to not be as close to the top of the head. I have spent hours working on the finer points of distinguishing these two species, and you can too, if you get on over to Blackrock Lake. Apparently the Greater Scaup are showing up there again with some regularity.

One additional highlight of the day was that we were able to locate a pair of Great Horned Owls. Their proximity to a huge nest high in a cottonwood may indicate that they have chosen their nesting site for this year. The female could be incubating eggs anytime now, as here in Colorado nests tend to begin being occupied at the beginning of February. Incubation then lasts about 35 days, so we could expect to start seeing little white owlets as early as mid-March. However, there is great variation in the nesting phenology, and it is possible to see owlets in nests as late as July. The photo below is of the male we saw. 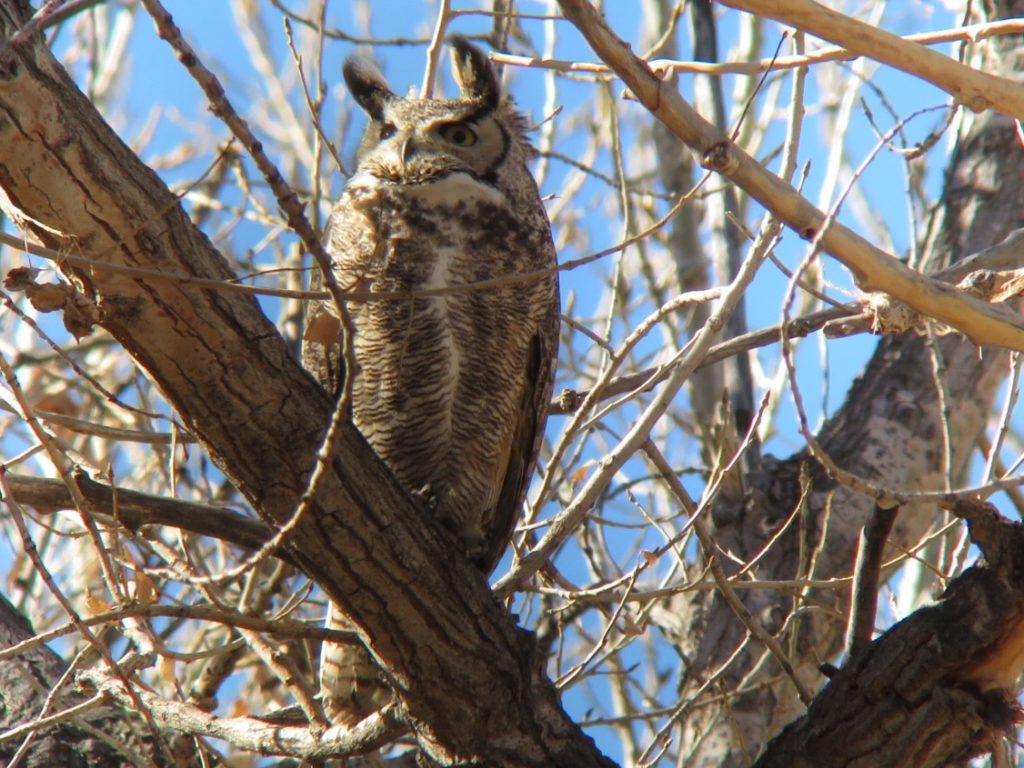